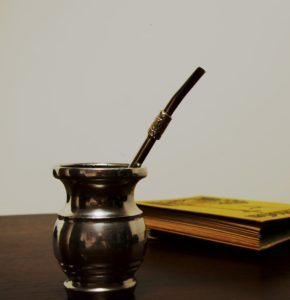 Whether filthy rich
Or poor in the extreme
Our delicious mate
In every house reigns supreme.
Enough is said of this libation
For further consideration
I do not lie when I say
As those who drink it do know
Our bitter mate has the power
To chase the blues away.

There are many tea traditions around the world. Indians enjoy Chai, a blend of black tea leaves and spices, at home and in the streets. Moroccans are famous for their Tuareg Tea, a blend of green tea leaves with mint which requires three servings, while Russians make zavarka, a black tea made in a metal container called samovar, which they enjoy with pastries.
Different cultures have different tea rituals, the most famous of which are perhaps the traditional Chinese tea ceremony, the English afternoon tea ritual and the Japanese matcha ceremony. Less known is the Argentine mate tradition.
Mate is the infusion of an herb called Yerba mate, Ilex paraguariensis, which grows in South America. Originally cultivated by the Guarani people of Paraguay, it became a drink of choice in parts of Brasil, Bolivia, Paraguay, Uruguay, Chile and Argentina, where it is considered a national drink.
According to a Guarani legend, the Goddesses of the Moon and the Cloud came to the Earth one day to visit. They encountered a yaguareté (jaguar) that was going to attack them but were saved by an old man. In compensation, the goddesses gave the old man a new kind of plant, from which he could prepare a “drink of friendship”.
This “drink of friendship” is traditionally prepared in a calabash gourd to which hot (never boiling) water is added and drunk through a straining straw called bombilla. Although mate can be enjoyed alone, its beauty lies in the social aspects of sharing the infusion with others.
The cebador/a prepares the infusion and has the first drink to test the temperature of the water and the smoothness of the drink. This first mate is also the most bitter because the infusion gets milder as more water is poured. The cebador/a then refills the gourd with water and passes it in a counter-clockwise direction to the first person, who drinks the contents of the gourd and returns it to the cebador/a for a refill. The mate is then passed to the next person, continuing in a circle. The participants of the circle keep receiving the gourd until the say gracias (Thank you). This ritual can continue for a few rounds or a few hours, in which case more water is warmed and the contents of the gourd are renewed.
In Argentina tomar mate (drink mate) is a tradition that started with the gauchos (cowboys) and is now part of everybody’s daily routine. It is synonymous with friendship; it is inclusive and it invites intimate conversation. It is served to guests on social occasions regardless of social status and age. Children sometimes enjoy mate cocido, which is brewed as tea or mate de leche (milk), which is infused with warm water in a gourd or as regular tea. Although traditionally mate is drunk without sugar, it can also be enjoyed with some sugar, honey, or better still, stevia leaves.

And for the milonga lovers, here is a treat from Carlos Mayel’s AL MATE…….enjoy